Not present in this version: moving and deleting files, file list, overwriting files.

Feel free to post your variants of UI design, a few themes will be added in the final version. 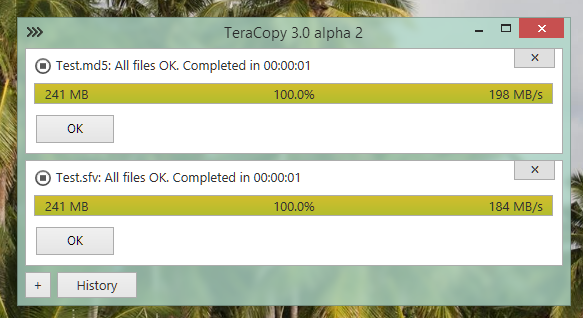 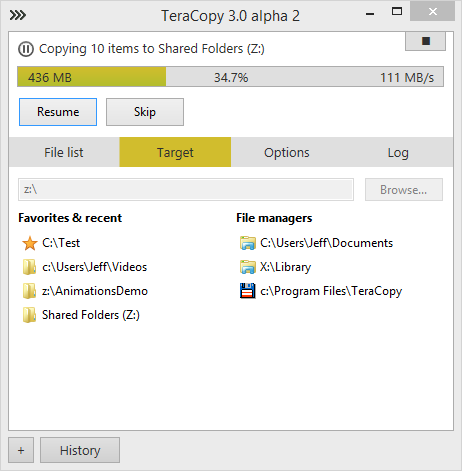 END_OF_DOCUMENT_TOKEN_TO_BE_REPLACED

Note: Temporarily removed auto-install of TeraCopy Windows service due to false alarms of antivirus software. If you want to try it, please run TeraCopyService.exe /install in Admin mode.

A new version of TeraCopy is currently being rewritten from scratch. The goal is to make it faster and more extensible. Planned features include:

TeraCopy 3 beta is expected to be released early next year.

The new copy engine is ready and shows a good speed with both large and small files. Testing was done with a single 8 Gb file and 9 000 small files (300kb in size). In both cases speed was on a par or slightly faster than in Windows copy. MD5 hash calculation was on during the large file copy. Small files copying speed improved a lot after disabling Windows Defender.

TeraCopy now can avoid UAC prompts while reading files usually requiring elevation. This will eliminate possible ‘access denied’ errors in a middle of the copy process. For security reasons this feature will be available only to non-elevated administrators, users with a ‘standard account’ will still be required to start TeraCopy with admin privileges.

Copying using Volume Shadow Service is ready. Used usually in backup applications, it allows you to copy files locked by other applications.

The final version is just released with minor bugfixes and UI improvements. Please test big files fragmentation, it should be lower now.

We’ll be running another sale at the end of this month, stay tuned!

If you found the ‘Shutdown after copy’ option not very useful, you can specify additional applications. Updated help page with example settings for USB Disk Ejector.