Starting now, and running through Monday November 30th, we are offering 50% off all our software.

The fine print:
– After you purchase TeraCopy Pro it may be used indefinitely.
– Upgrades to future versions of the software will be free for the lifetime of the product.
– TeraCopy Pro is licensed per user, so if more people are going to use TeraCopy Pro you will need to purchase additional copies.
– Each license allows installation on all owned computers, and TeraCopy Pro may be used at exactly the same time on each of them.
– Transfer of a license to another owned computer is allowed.
– License activation isn’t required.

Initial implementation of the file list, which currently allows scrolling and filtering. Items are loaded dynamically to support lists with virtually any size. 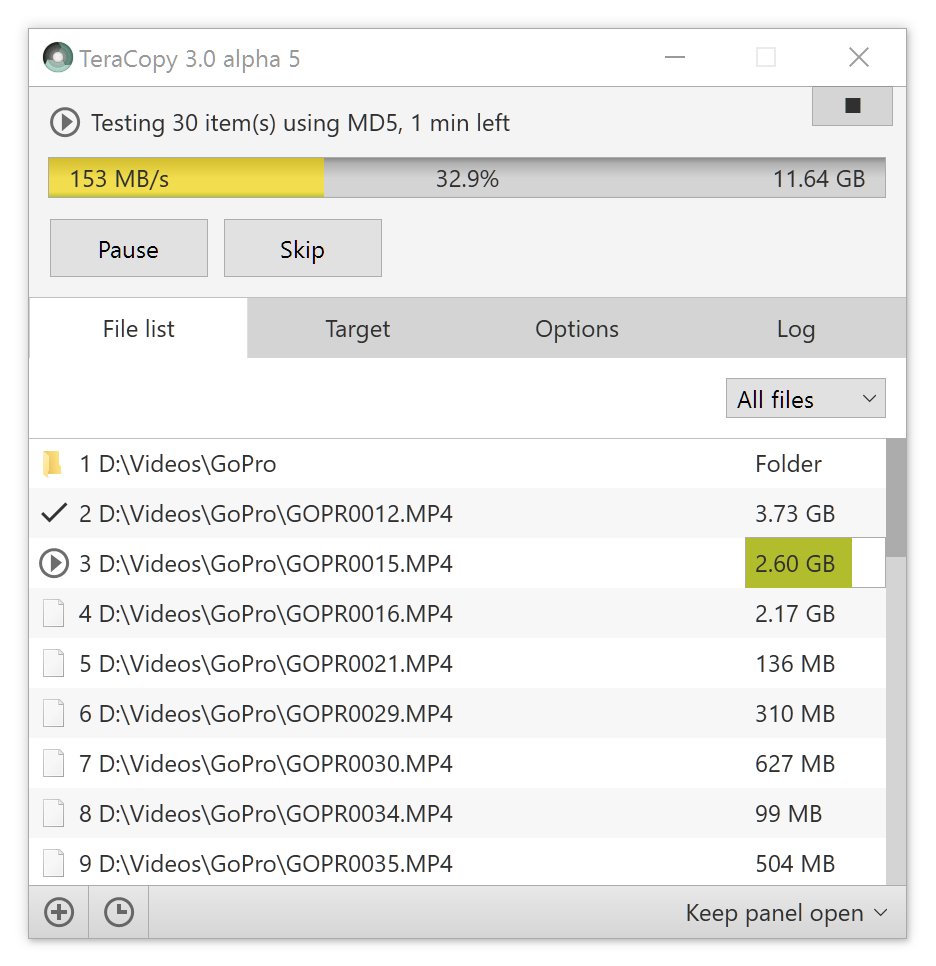 It’s more usable now, but file list is not implemented yet.

The file replace dialog is ready, if you need more replace rules/options please post it in the comments along with a scenario, i.e. why you need it.

The UI was also updated for Windows 10 and Ultra HD monitors.

If you’re searching for a TeraCopy 3 Pro crack, you’ve come to the right place. Because the Pro version of TeraCopy 3 doesn’t exist yet. We feel really sorry for people who waste their time downloading TeraCopy 3 from pirate sites. In the best case you’ll get some name (not yours) in the about dialog – that’s all the difference. In the worst case, you’ll get a virus or a malware. So, save your time and just download TeraCopy from the official site: codesector.com/downloads.

Not present in this alpha version: file list, overwriting files.

TeraCopy Pro is 50% off on BitsDuJour until February 25, 2015:
www.bitsdujour.com/software/teracopy

The fine print:
– After you purchase TeraCopy Pro it may be used indefinitely.
– Upgrades to future versions of the software will be free for the lifetime of the product.
– TeraCopy Pro is licensed per user, so if more people are going to use TeraCopy Pro you will need to purchase additional copies.
– Each license allows installation on all owned computers, and TeraCopy Pro may be used at exactly the same time on each of them.
– Transfer of a license to another owned computer is allowed.
– License activation isn’t required.

Not present in this version: moving and deleting files, file list, overwriting files.

Feel free to post your variants of UI design, a few themes will be added in the final version.

END_OF_DOCUMENT_TOKEN_TO_BE_REPLACED

Note: Temporarily removed auto-install of TeraCopy Windows service due to false alarms of antivirus software. If you want to try it, please run TeraCopyService.exe /install in Admin mode.

A new version of TeraCopy is currently being rewritten from scratch. The goal is to make it faster and more extensible. Planned features include:

TeraCopy 3 beta is expected to be released early next year.

The new copy engine is ready and shows a good speed with both large and small files. Testing was done with a single 8 Gb file and 9 000 small files (300kb in size). In both cases speed was on a par or slightly faster than in Windows copy. MD5 hash calculation was on during the large file copy. Small files copying speed improved a lot after disabling Windows Defender.

TeraCopy now can avoid UAC prompts while reading files usually requiring elevation. This will eliminate possible ‘access denied’ errors in a middle of the copy process. For security reasons this feature will be available only to non-elevated administrators, users with a ‘standard account’ will still be required to start TeraCopy with admin privileges.

Copying using Volume Shadow Service is ready. Used usually in backup applications, it allows you to copy files locked by other applications.

TeraCopy.exe can be used as icon source. You can also create two separate buttons, just split the script in half.

Another script is available here: www.xyplorer.com/xyfc/viewtopic.php?f=7&t=2596&start=195

The final version is just released with minor bugfixes and UI improvements. Please test big files fragmentation, it should be lower now.

We’ll be running another sale at the end of this month, stay tuned!